Get ready to RETHINK your sluice box. 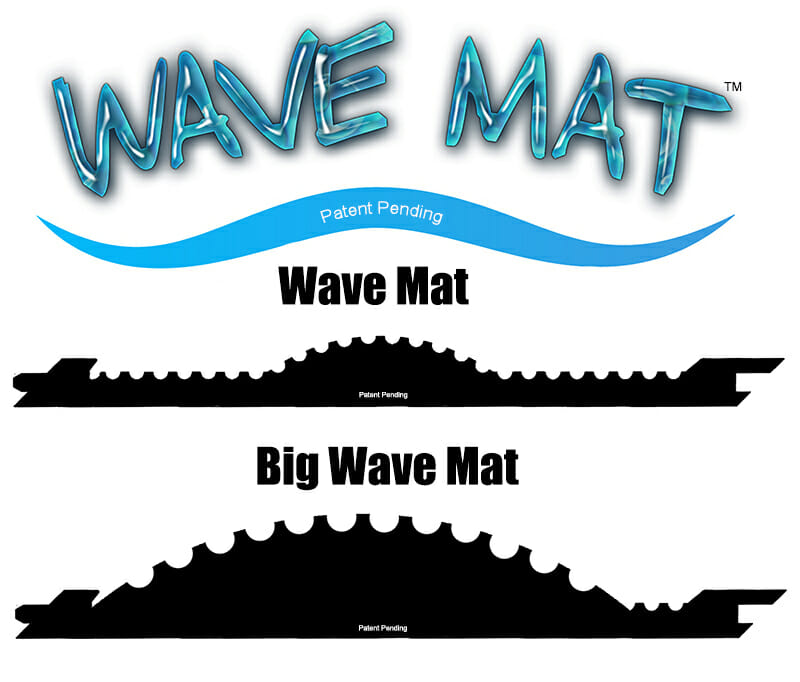 For deep water sluices only 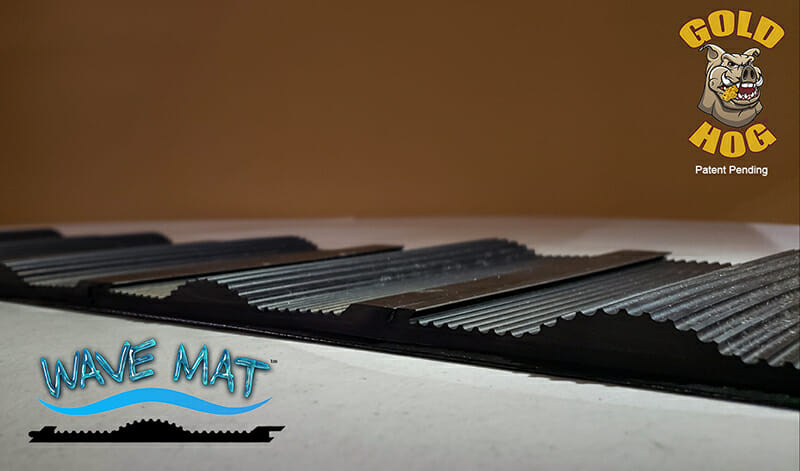 Many have asked TONS of questions like… Can I use the Wave mat in a dredge? Can I use this with Talon mat? Etc..  It’s critical to understand that the WAVE mat is a LOW energy mat. It would NOT play well with standard mats such as scrubber, talon, etc. It’s more in the line of UR and Washer mat in needed energy.  If you want to use this mat in your NORMAL sluice, not a soft and quiet sluice… You probably need to go with the BIG Wave mat. We’ll be doing videos shortly.  Again, if you know how low energy the Gold Cube is… the Wave mat can be used in it. →READ THIS FOR AN EXAMPLE.

Info below and orders done → HERE

Doc has been working on this now Patent Pending Technology for about two years.  There are several ways we plan to utilize it, but the first is the new WAVE MAT.

The PATENT PENDING elliptical / convex surface causes A CHANGE IN SLURRY SPEED AND ENERGY, allowing gold to fall out of the slurry without the turbulence of a RIFFLE.  Much like happens when a river or stream TURN A CORNER. This provides a variance in flows and energy which is required for settling.  Also, the bed-load (lower portion) of the slurry gently rises and falls without turbulence, and this action allows the heaviest particles to fall out of the flow first… and be captured.

“Allowing for a settling / stratification without the use of TURBULENCE… is the KEY.”

Normally most sluices use some form of “riffle” or flow interruption to create an EXCHANGE zone via a vortex like generator in combination with a low pressure area.  Many of our mats do the same thing, but in a much gentler way.  The material must RIDE OVER SOMETHING … which is then followed by a low pressure zone or VORTEX in an attempt to classify / hold material based on its weight or specific gravity.

There are many forces / factors that can over ride the specific gravity separation  only method.

However the WAVE MAT™ does NOT create any flow interruption or rely on vortexes.  Instead exposing the slurry and material to a WAVE LIKE (HUMP) pattern, the energy and slurry is very slightly slowed down at different points.  This slow down, or low pressure / energy zone allows the heaviest of the material in the slurry to drop out of the flow. Similar effects happen when rivers turn corners or WIDEN out.  Once the fine gold drops out of the slurry, it is offered lots of small hiding places, GROOVES, to hide from the energy of the slurry. 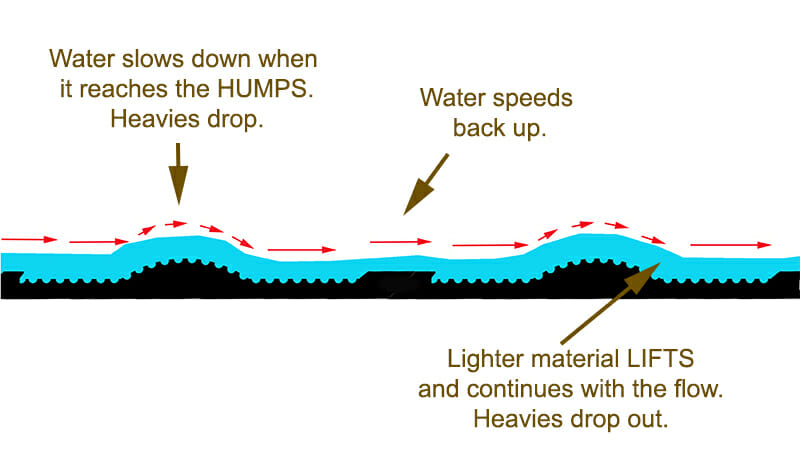 Also there is a LIFT and FALL effect as the materials and slurry rise over the hump and then are released on the opposite side.  Think of traveling down the road at 60 mph and going over that HUMP in the road.  You, and everything else in your vehicle is slightly airborne for second. The slurry feels the same thing.  Lighter material continues with the rising flow and heavier material drops first and “hugs the hump” and drops out.

To achieve best results when using this mat, the slurry must RIDE and FOLLOW this pattern. Therefore sluices with DEEP water cannot use the standard wave mat, the BIG wave mat is needed.  The standard wave mat is designed for sluices that have a lower GPH or flare sections where the water flow / depth is roughly ¼” to ½” deep.  Deeper water will nullify the drag, water speed change, and the other effects. For deeper water sluices the BIG WAVE mat is needed. 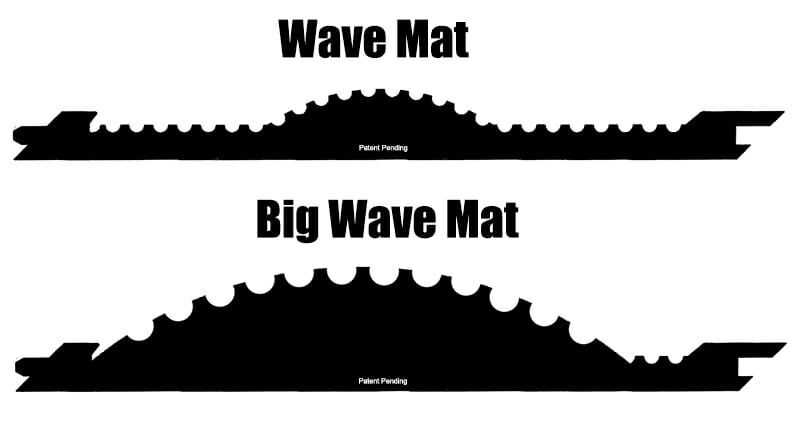 Again, this is NOT a primary capture mat.

This mat is a VERY effective mat when placed FURTHER down the sluice in more QUIET areas. It will capture fine gold that traditional / more turbulent riffle / matting systems miss.  It is NOT aggressive, it is a finishing mat.  If you are running a traditional sluice your slurry should first be exposed to more aggressive / traditional capture methods such as our Talon mat, Scrubber Mat, Riverhog mat, etc.  As Doc has repeated OVER AND OVER… you should be exposing your slurry to varying surfaces, speeds, water depths etc.  ALL GOOD commercial ops understand this.

The standard wave mat is designed to target mainly fine gold in the 30 – 300 mesh rage.  The BIG wave mat will capture both larger and finer gold. (Click the pic to enlarge) 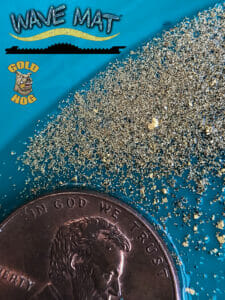 Yes it will perform well on beach sands (see testing videos) but when running black beach sands it’s critical that you understand how hydraulic equivalence impacts the performance of any sluice and it’s capture rates. 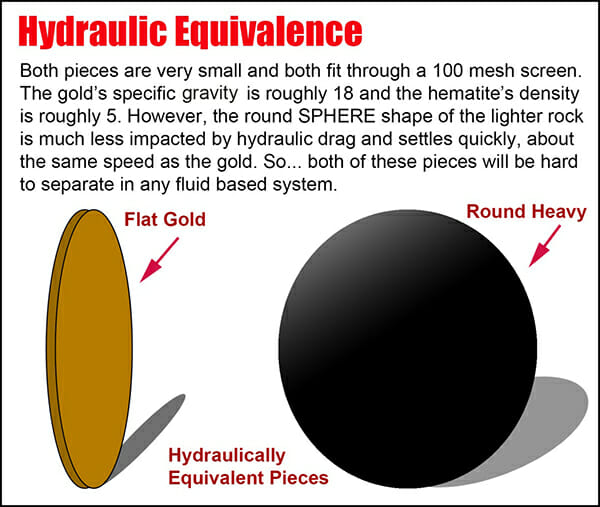 Experienced beach sand miners (and crushed ore ops) understand that this BATTLE of equal settling properties requires TIME.  So short sluices do not produce good results.  Long Toms work much better and the feed rates must be moderated to allow the BATTLE to have a chance of winning. The long sluice below captured over 20 OUNCES of gold in roughly 3 months.  Almost all of the gold was 100 – 200 mesh gold. 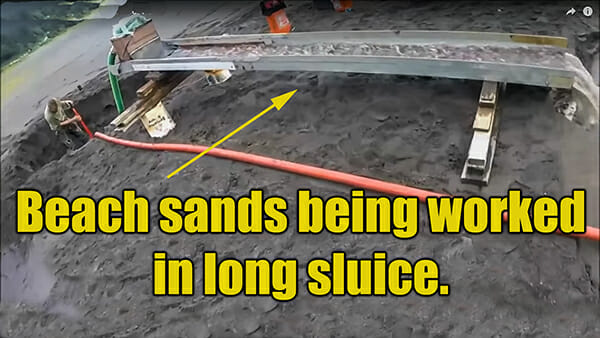 So, DON’T plan to run just 24″ to 36″ of this mat in a heavy fed sluice and expect high capture rates.  The longer the sluice the better to allow for repeated RISE and FALL of the water speed.

Mix with other mats:

Yes, we believe that it would be a good ALTERNATING mat with a few of our mats that do not present heavy cutting ridges or flow interruptions.  Example… Going UR-WM-UR-WM-UR-WM would give you a speed up area (UR) then a reduction in slurry speed (WAVE MAT).  You could do the same with the Washer Mat, or even Motherlode Mat.

We will be doing some videos on tuning the pitch shortly, but we believe that each miner should experiment with their own material and water flow.  Again… take it to the extreme where nothing can stay in the mat. Then start REDUCING the pitch / angle until you get the desired results.  Not too bare and not over loaded is the goal.  AGAIN… Start with the sluice VERY HOT.  Then reduce the pitch 1-2 degrees at a time until the desired results / capture rates are achieved.

Could it be used in the Multi Sluice and other equipment?

Yes, we will be adding the WAVE MAT to various pieces of equipment we make over the next 12 months. (more testing is needed)  But one could easily make a total WAVE MAT for the Multi Sluice, stream sluice, mini extension, etc. The BIG WAVE mat can be added to higher volume / deeper water sluices but should be added near the END of a sluice.

While the is no MIRACLE CURE for catching super fine gold we believe this mat represents a great alternative and different capture zone / process.